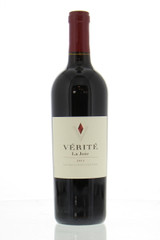 Wine Advocate 97 - The 2014 La Joie has a spicy black purple color and a big, sweet kiss of camphor, black truffle, pen ink, blackcurrants and unsmoked cigar tobacco, followed by layers of fruit and glycerin in an opulent, beautifully savory, pure and multidimensional wine. The final blend Seillan produced in 2014 was 78% Cabernet Sauvignon, 13% Merlot, 7% Cabernet Franc and 2% Petit Verdot. This is a compellingly great effort once again. It should be given 2-5 years of bottle age, then drunk over the following three decades.
Rating: 97+
Jeb Dunnuck 97 - The estate’s Cabernet Sauvignon dominated release is the 2014 La Joie. It’s an incredible wine based on 78% Cabernet Sauvignon, 13% Merlot, 7% Cabernet Franc and the balance Petit Verdot. Reminding me of a top vintage of Ducru-Beaucaillou (the 2010?) with its classic Cabernet character, it offers thrilling notes of crème de cassis, exotic flowers, liquid rock-like minerality, and graphite and lead pencil nuances. Deep, concentrated, and backward, it has perfect balance, good acidity, and an undeniable Bordeaux-like weight and texture. Nowhere near primetime, it needs 5-7 years of cellaring and is going to keep for three decades.
Rating: 97+
Decanter 96 - A Cabernet-dominated blend, La Joie reveals a classic bouquet of crushed cassis, wild plum, pencil shavings, wood smoke and a subtle framing of toasty oak. On the palate the wine is powerful, framed by firm but fine tannins and underpinned by a tensile line of acidity. It's the most structured and powerful of the Vérité wines, sapid and serious.
Current stock: 0
Reviews